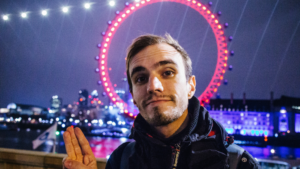 Snake Charmer by choice, Game Producer by trade, Gabriel grew up as a game designer building mobile games at Gameloft. He then joined EA, as a producer, where he worked with major brands like Command & Conquer , Worms and FIFA. His next adventure was Amber Studios where he built the Studio branch of the company, and created Cinderella Free Fall. As a Creative Director, with Amber their first original game game, Link Twin, won 2nd place in The Very Big indie pitch in 2017.