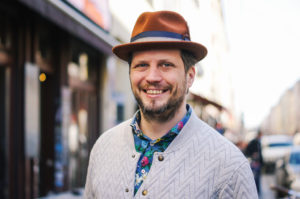 
Michael Liebe is CEO and founder of Booster Space, the company behind gamesweekberlin, QUO VADIS conference, Gamefest, VR NOW Con & Awards, Womenize! and many other events driving to connect business, technology and culture of games, VR and other media. The company also developed and published the game, DUEL VR. Michael is an advocate of crowdfunding and supports Kickstarter as Games Outreach in Europe since January 2016.

In the times before Booster Space he co-initiated the indie games and art festival, A MAZE., the Digital Games Research Centre of the University of Potsdam (DIGAREC) as well as the Computer Games Collection of European Media Studies at the University of Potsdam, the European Masters program, Ludic Interfaces and the games:net berlinbrandenburg. Until 2012 he was Advisor – New Media at the Medienboard Berlin-Brandenburg and responsible for marketing and networking for the “New Media” industry in the German capital region. He holds an M.A. in European Media Studies, is advisor and jury member and works as university lecturer