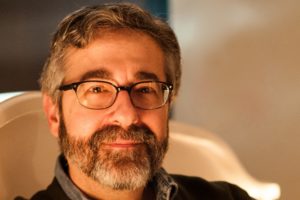 Warren Spector, best known for his work on Deus Ex, Disney Epic Mickey and several Ultima games, began his career in 1983 in tabletop games with Steve Jackson Games and TSR, moving into digital games in 1989 where he worked at Origin before joining Electronic Arts and, later, Looking Glass, Ion Storm and Eidos. In 2004 he started Junction Point Studios, later acquired by the Walt Disney Company. After teaching game development at The University of Texas from 2013-2016, he joined Otherside Entertainment as Studio/Creative Director of that company’s Austin, Texas office. He was awarded an Honorary Doctorate by Columbia College of Chicago as well as the Game Developers Choice Lifetime Achievement award at the 2011 Game Developers Conference. In 2016 he received the Honorary Award for Lifetime Achievement from the Fun and Serious Games Conference.